The Frankenstein Castle towers in about 400 m (ü.NN.) height above the Rhine level. It is the northernmost of all castles lining the mountain road.

Legends and fairy tales, notions of romantic knightly glory up to ghost stories, all this revolves around the more than 750 years old walls of Frankenstein Castle. Built in the 13th century, the castle was the center of a small rule under the lineage of the lords of Frankenstein for 400 years. Eberstadt, Nieder- and Ober-Beerbach and other Odenwald villages belonged to it. During this time, it was expanded in several stages of construction to a stately complex. The gentlemen of Frankenstein, whose lineage is still flourishing today, were responsible for the lower courts and the church order.
Although year after year throngs of tourists are looking for some ghosts and the media are busy spreading such tales, “Frankenstein’s Monster” springs solely from the poetic inspiration of English writer Mary Shelley. It would be too good, but unfortunately, there is not a single serious proof that this has anything to do with Frankenstein Castle.
Other horror stories, such as those of an obsessed scientist who is said to have carried out mysterious experiments there, do not stand up to serious historical research. What is certain is that the surrounding villagers had never had to fear a murderous monster or other ghosts. The scientific proof that these are pure inventions can be found in the following essays. (Detailed in “Any monsters at home” or “Monster on the Frankenstein” for short)
In view of today’s ruins, one should not conclude on former robber baron fights or military actions. At no time was the castle involved in sieges, no martial destruction took place. In 1662 the Lords of Frankenstein sold the castle to the Landgrave of Hesse-Darmstadt. It was only in the middle of the 19th century that the Hessian Grand Duke secured the remaining ruins from further decay and restored the two towers.
Tour groups and visitors receive free castle tours under scientific direction. Registration: eberst.frankenstein@email.de

Opening hours of the restaurant:
March – December, Tuesday to Sunday from 11 am to 10 pm; January and February: weekends from 11am to 6pm.
www.eberstadt-frankenstein.de
Tel .: 06151-501501, mail: mail@burg-frankenstein.de 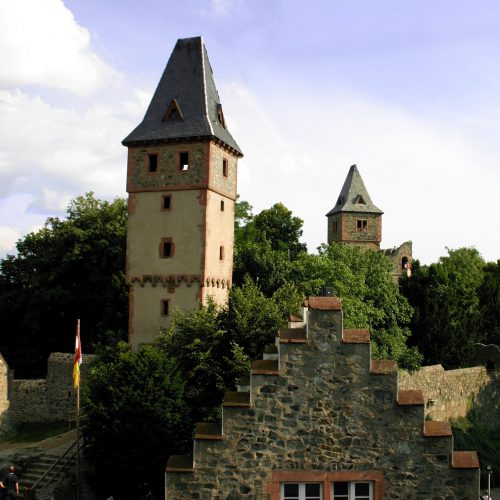